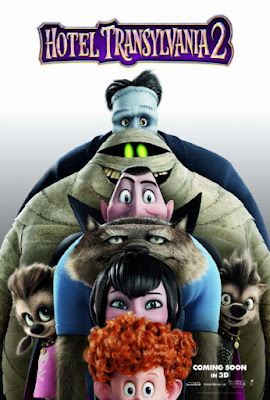 Just back from the theaters where we saw Hotel Transylvania 2 which opened in theaters this weekend and kicks off the fall/holiday movie season.  The story line is not one that requires viewers to have seen the first film - which, I will say right up front, was far superior to this sequel. My 11-year-old son enjoyed this movie, but agreed it didn't come close to the original.

Read my review of Hotel Transylvania.

Hotel Transylvania 2 picks up right where the first film leaves off.  Mavis (Selena Gomez) - the daughter of Dracula played by Adam Sandler - now with the blessing of her father is getting ready to marry her human boyfriend, Johnny (Andy Samberg).  Time passes and they have their first child, Dennis. Dracula is a doting grandfather but quickly becomes consumed with whether or not his grandson will find his inner monster (which he must do by his fifth birthday) and grow-up to be a vampire.  But, how do you raise a monster when even the monsters aren't behaving like monsters anymore?  And, if Dennis turns out to be just a mere human, will Mavis and Johnny move to California so he can have a normal life?

The film reunites all our favorite characters from the first film and, in addition to those I've already mentioned, includes the voice talents of David Spade, Kevin James, Fran Drescher, and Steve Buscemi.  Mel Brooks was among those added to the cast playing Dracula's father, Vlad.  Vlad and his cohorts of scary bats offer the only scary images in the film. There are some clever jokes but similar to the first film, it relies heavily on slapstick comedy.  I do like that the plot focuses on the thematic element of acceptance even among our differences (as the first one did).

Overall, Hotel Transylvania 2 seemed to please the packed audience which was full of adults accompanying the littlest viewers to young teens, and it definitely gave my son some laughs. However, this film was clearly written as a sequel hoping to capitalize on the success of its original.  The film is rated PG for some scary images, action and rude humor.  It makes a cute, fun family film, but definitely falls short of the first film.