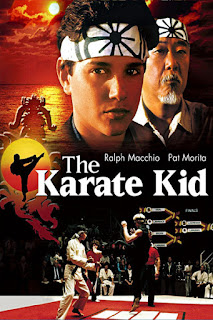 Hard to believe it's been thirty-one years since The Karate Kid was released, and, yet, it has become a favorite of  both my sons.  The film reeks of the 80s, but I can't imagine it any other way. (Please don't get me started on the 2010 re-make. I like to pretend it never happened.)

The Karate Kid is rated PG, but so are most Disney animated films (see below for important details about this film's rating) so my sons saw this one really early on.  The main reason being my son was taking karate at the time and was about to participate in his first tournament. As I recall he begged me to let him watch it. His sensai advised me NOT to show him the film until AFTER the tournament because the film is not realistic in this regard at all. The tournament as featured in the movie is more of a MMA fight - brutal!

"Lesson not just karate only. Lesson for whole life. Whole life have a balance. Everything be better." ~ Mr. Miyagi, The Karate Kid

Ready to start a new life, single-mom, Lucille Larusso (Randee Heller), and her son, Daniel (Ralph Macchio), move from NJ to sunny California. Daniel almost immediately gets in the radar of the school bullies, a group of karate students that, unfortunately, have a sensai that doesn't know the true meaning of martial arts.  AND.....of course, it's all over a girl, Ali Mills (Elisabeth Shue).  Having witnessed one of the attacks, Mr. Miyagi, played by Pat Morita, agrees to help Daniel learn the art and true meaning of karate so he can put an end to the bullying.

What develops is a powerful relationship between Daniel and Mr. Miyagi, one based on complete trust and respect. The Karate Kid examines the true meaning of karate and focuses on the fact that it is a discipline of the mind and heart. One trains in karate so one never has to fight.

This film was released two months prior to the MPAA implementing the PG-13 rating, so as I watched it again (this time for the purpose of my review) I can see how The Karate Kid would most likely today be considered PG-13 and not suitable for the PG rating it received back in 1984.  The PG rating is for violence, including some scenes of bullying and some language.  But I will remind parents who haven't seen it in years and are considering it for a family movie night, that there is also a scene depicting alcohol use (Mr. Miyagi gets rip-roaring drunk and passes out) and one scene where our villain, Johnny (William Zabka), is rolling a joint in the boys' bathroom at school.

"If comes from inside you, always right one (choice)" ~ Mr. Miyagi, The Karate Kid

This iconic film that gave us the phrase "wax on, wax off" is a powerful film that stresses inner strength. The Karate Kid deals with several important issues for middle and high-school students including classism, sportsmanship, commitment, and believing in oneself.  It is a great coming of age film, and, one of the most memorable underdog movies ever made with a final few minutes that still give me chills EVERY time I watch it.