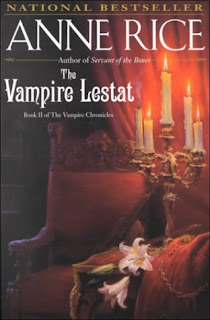 "Do you think we find our destiny somehow, no matter what happens? I mean, do you think that even as immortals we follow some path that was already marked for us when we were alive?" ~ The Vampire Lestat.

To get my complete review of this Rice classic, I suggest you read My Unreview of The Vampire Lestat.

If ever there was an author that proved genius to some and tedious to others, it would be Anne Rice. At halfway through The Vampire Lestat I wrote an "unreview" stating that, although I was enjoying some aspects of the story, there were others that were making this novel a chore for me to read.  On more than one occasion, I contemplated giving up on it. However, I am happy to say I persevered and finally finished it.

"He had some vision of all things being united in good, of all forces being made to go on the same divine course." ~ The Vampire Lestat

At the end I was very glad I kept at it because I believe in exposing myself to different authors and genres. Also because I felt the last quarter of the novel was without question the most interesting (if you recall, I felt the same way about the last part of The Wolf Gift) as it delves into the origins of vampires, Mother Earth, and ancient gods. This is also where the reader is introduced to one of the most interesting characters, Marius, whom I loved as much as Lestat.

Am I happy I finished The Vampire Lestat? Yes, I truly am. However, I am confident that it will be the only novel in Rice's Vampire Chronicles that I will read. My love for the characters just wasn't enough for me to venture into any additional books in the series.