Bridge of Spies starring Tom Hanks and Mark Rylance was released in the fall of 2015 and was one of those "quiet" films that attracted a certain audience but ended up walking away with countless industry award nominations (including SIX Oscar nominations) and wins. In other words, Steven Spielberg did it again! 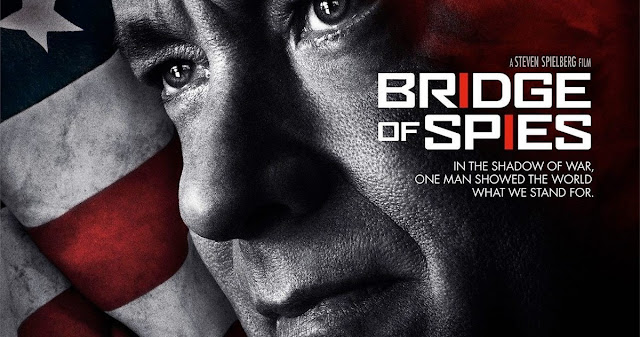 Inspired by true events and other works of literature including the novel Strangers on a Bridge by James Donovan, Bridge of Spies takes place during the height of the Cold War in the late 1950s and early 1960s, a time that had a very distinct feel. Those that remember it will identify with this film very much.  There was the constant threat of nuclear war, the drills in school, the sirens, the hate fueled by fear and the building of the Berlin wall. This was a war not of soldiers, but of information - and spies.


"Nothing about this is narrowly legal. There are bigger issues." ~ Bridge of Spies

In 1957, Rudolf Abel (Rylance) is arrested in Brooklyn for being a Soviet spy. The American Bar Association gives insurance lawyer, James Donovan (Hanks), the difficult task of defending Abel. Difficult not only from a legal standpoint, but because public opinion already had Abel tried and hanged before he even stepped foot in the courtroom. However, while Donovan feels strongly that it is his duty as an officer of the law to give the accused the best defense possible and in turn represent the American justice system, the U.S. government and its citizens think otherwise.

In a true act of heroism, Donovan's passion for civil liberties trumps the orders of his country. And, with his negotiation tactics, this insurance attorney finds himself in the forefront of political warfare.

Hanks delivers another stellar performance and Rylance (who won the Oscar for Best Supporting Actor) was magnificent giving a heartfelt and touching portrayal of a man guilty of only serving his country.

Bridge of Spies is a fascinating historical fiction. I enjoyed it much more than I anticipated. The film touches not only on the reality of our past political practices, but raises questions that remain in the midst of controversy today - the right of due process for those here illegally and the treatment of political prisoners.

The film is rated PG-13 for some violence and brief strong language.