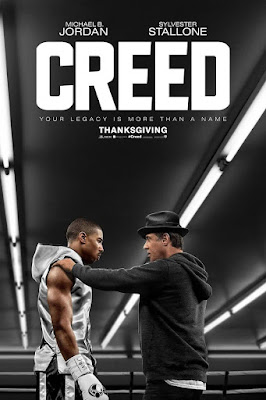 I recently sat down and watched the film Creed starring Sylvester Stallone as the iconic Rocky Balboa, and Michael B. Jordan who plays Adonis Creed, the son of the late boxer and former Rocky opponent turn trainer, Apollo Creed, whom he never met. Creed was the first film in the Rocky series not written by Stallone indicating that not only was Rocky passing the torch to Adonis, but Stallone himself was passing the torch to writer Ryan Coogler.

First, let me say that I recommend this film to just about anyone who grew up in the Rocky era based solely for nostalgic reasons. It was nice to see Stallone as Balboa again. Of course, if you are a die-hard fan of the franchise, you'll definitely want to see it.  I know I saw the first three, maybe four, Rocky films - certainly not all 6 of the previous films. This was not a problem. In fact, even if you never watched a Rocky film before, you can dive right into this 6th sequel. Creed is a perfect story to introduce another generation to one of the most famous characters in the history of film.

After starting off as a troubled youth, Adonis is taken in by Mary Anne Creed (Phylicia Rashad), Apollo's widowed wife, who raises him. As an adult, he competes in some amateur boxing matches, but aches to be taken seriously and to live up to his legacy. He seeks out Balboa who eventually agrees to train him.

The remainder of the film has some familiar (and predictable) scenes as Adonis and Rocky train. Like Rocky had, Adonis has a love-interest, Bianca, played by Tessa Thompson who was my favorite character in the film. All this leading up to - you guessed it - a boxing match finale which, although paved the way for further sequels, was anti-climatic.

Overall, the story was average, the acting was mediocre, and personally I didn't think Stallone deserved his Oscar nomination for Best Actor in a Supporting Role. I suppose the Academy was feeling sentimental too. One highlight of the film was the music. Original pieces for Creed were mixed in with modernized versions of the famous soundtrack (most notably the Rocky theme song) we all know and love. Again, this is a worthwhile watch if you are a Rocky fan or simply grew up during the heyday of this franchise.

Creed is rated PG-13 for violence, language, and some sensuality.