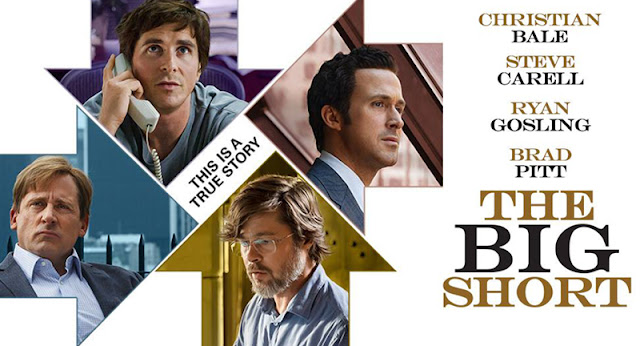 For me, what enhances any movie experience is if I leave the theater (or my couch) feeling some type of emotion, whether it's happiness, inspiration, or pure thrill. Hell, I'll even take shock, sadness and disbelief. However, anger to the point of being nauseated, which can be translated into powerlessness, is not a feeling I want to have when the final credits of a film roll.  With that being said, I was so infuriated watching The Big Short and even more so at the end, that I almost regretted watching it. I said ALMOST.

"This level of criminality is unprecedented even on fucking Wall Street." ~ The Big Short

The Big Short, a biographical drama/comedy, is based on the polarizing true events leading up to the collapse of the housing market and the big banks in 2008. It is considered the worst financial crisis in modern times.  After all, the housing market was traditionally stable and low-risk.  So what happened?

Greed happened. Greed and corruption (with a dose of stupidity) on such a massive scale that this crisis not only took down the American economy and threatened the very existence of capitalism, it, in essence, crushed the American dream. We all remember the headlines. Millions of Americans lost their jobs and their homes, and in the end, the American taxpayers had to bail out the system. But the damage didn't stop there. The collapse had a ripple effect that spread to economies all over the world.

"I want you to walk back in there, and very calmly, very politely, tell the risk assessors to fuck off." ~ The Big Short

The Big Short was adapted from the nonfiction book by Michael Lewis and received numerous industry nominations including 5 Oscars, among them Best Picture, and was the winner for Best Adapted Screenplay. While I realize the topic alone may make some viewers shy away from this film, the script and the performances were so riveting, die-hard movie fans of any genre will like it despite the very technical subject matter and jargon.  Plus, the film goes out of its way to provide explanations when needed and even tutorials by celebrity cameos that not only help clarify terms, but are entertaining. I know that sounds a bit odd, but trust me. It worked!

The script successfully offers comic relief, even if subtle at times, amid a very serious view of a corrupt system and took me by surprise. Christian Bale who portrayed Dr. Michael Burry, the man whose financial predictions and warnings fell on deaf ears for years, was nominated for Best Actor in a Supporting Role. However, it was Steve Carell who delivered a brilliant performance as Mark Baum, another eccentric Wall Street outsider, that stole the movie for me.

I am no stranger to this news story that rattled our nation, yet I still couldn't help but watch in utter disgust at the level of fraudulence depicted in the film. Most will find it is worth the watch not only for the high level of filmmaking it produced, but also as a lesson into one of the most important stories of our country's modern history. However, I would not recommend it to those that have zero interest in the film's subject. The Big Short also stars Brad Pitt, Ryan Gosling, Marisa Tomei, Finn Wittrock, and John Magaro. This film is rated R for pervasive language and some sexuality/nudity.