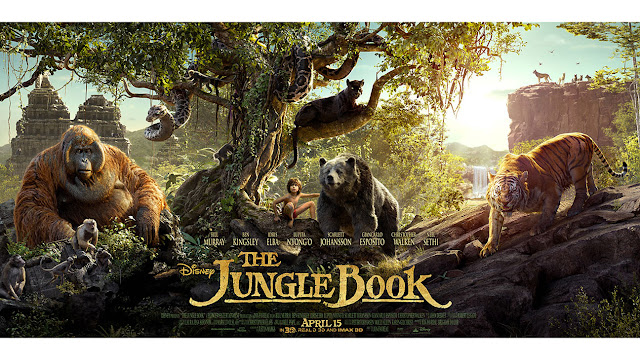 The Jungle Book opened in theaters on April 15 and is proving to be a huge hit, and not just with young audiences. I was shocked at the number of adults packed into the theater that were not there with kids. Perhaps because The Jungle Book is a beloved story by Rudyard Kipling that has been brought to life in several animated versions, most notably Disney's 1967 full-length animated feature.  Now using a photo-real computer generated world, which in simple terms means part live action and part animation, the popular children's classic is reaching a whole new generation of fans. The virtual world is so masterfully done you will feel like you are truly in the forests of India.

This is where I let you in on an embarrassing secret. Although I own a copy of Disney's animated version and the book, I don't recall reading it and never sat down and really viewed it with my sons. It never became one of those films that they watched a billion times. Therefore, going in I knew only basics about the story.   An orphaned boy named Mowgli played by Neel Sethi is raised by a pack of wolves after being rescued by Bagheera, a black leopard (Yes, Mr. Kipling. With all due respect, Bagheera is a leopard, not a panther!) played by none other than Ben Kingsley.  When a drought in the jungle leads all the animals to the watering hole called Peace Rock, the wolf pack runs into the feared tiger, Shere Khan (Idris Elba). Carrying more than the physical scars on his face caused by man, Shere Khan vows to kill Mowgli as he represents all the evil of men.

Instead of risking the lives of his pack, Mowgli leaves and heads for the man-village where Bagheera says he belongs. Along his journey he befriends Baloo who provides the most humorous moments in the film - and no surprise with Bill Murray as the voice behind this lovable bear.  Together Mowgli, Baloo, and Bagheera face many tense moments  as they face enemies and forces of nature.

There are several scenes that will make small children jump. Hell, they made ME jump. There are also many intense animal fight scenes and a very scary ape, King Louie, played by Christopher Walken who may prove too frightening for young audiences. Therefore, I recommend this film only to elementary school aged children and up.

The screenplay was well done by Justin Marks.  However, I wish he emphasized a few key themes more and geared them more toward younger audiences.  So here are some talking points for parents to use to discuss the film with their children, particularly the ending which, as a tiger lover, was difficult for me to watch. It is important to understand that to Shere Khan, Mowgli represents the one true monster on earth - man. Of course, the tiger's obsession with revenge leads to his demise and is another great lesson for children. Most importantly, children should use Mowgli as an example of all that is good with humankind and how people are responsible for the protection of nature and wildlife.

With that said, there are also many beautifully tender moments. For example, there is a scene where Bagheera instructs Mowgli to bow to a herd of passing elephants out of respect for the majestic animals - a truly remarkable moment that brought tears to my eyes.  The film is a visual delight and animal lovers of all ages will enjoy it.

The Jungle Book is rated PG for some sequences of scary action and peril.