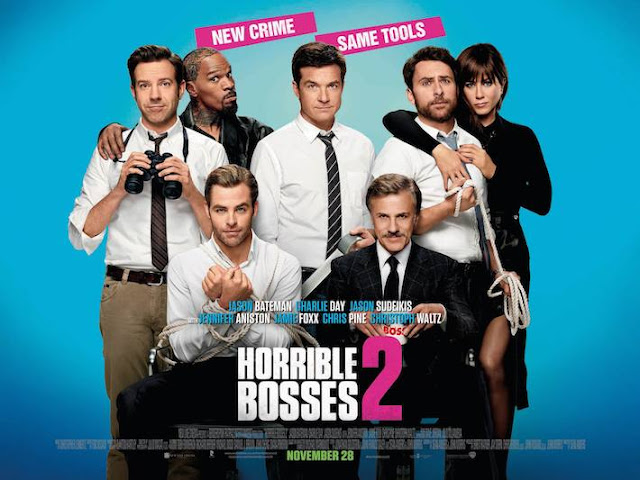 If you're looking for a comedy that doesn't make you think too much, one that is a little slapstick, a touch of black comedy and contains lots of bathroom and sexual humor - Horrible Bosses 2 is for you. Although met with mixed reviews, this sequel is worth a watch. No problem if you haven't seen the first one, most of the prior references are explained. Remember, this film isn't sophisticated and you won't be watching because of the complicated plot. You will, however, enjoy some laughs and many worthwhile performances.

Tired of working for horrible bosses, Nick (Jason Bateman), Kurt (Jason Sudeikis), and Dale (Charlie Day) go into business for themselves and invent the 'shower buddy.'  In their search for a distribution company, they are approached by manufacturing tycoons, Burt Hanson (Christopher Waltz) and his son, Rex (Chris Pine).  However, our ambitious trio soon learns that they have been screwed by yet another horrible boss and they find themselves in debt for half a million dollars.

Lost for a way out of this financial mess, Nick, Kurt, and Dale swear revenge. Deciding murder is out of the question (LOL) they opt for kidnapping. What could possibly go wrong? Apparently a lot!! When the tables are turned on them during their scheme, they land themselves in much deeper water than they could have imagined. The end result is one of the most unusual, and hysterical, police chases in movie history.

Keep in mind that what this film lacks in sophistication it makes up for with some awesome performances.

Kevin Spacey's brief return as Dave Harken, Nick's former boss, may have made the entire film worthwhile. Jamie Fox also returns for another hilarious performance as Dean "Motherfucker" Jones. Jennifer Aniston returns as Julia, Dale's sex addict former boss, and is the premise behind many obvious, yet laugh out loud, jokes. Jonathan Banks' portrayal of Detective Hatcher is also worth mentioning. And, while I have seen Pine in a few other roles, he shocked me the most proving himself a versatile actor who is more than capable of being funny.

Overall, Horrible Bosses 2 will provide many laughs. While Sudeikis and Day are more obvious in their comedic delivery, Bateman once again delivers a dry and witty performance.   There are many moments when the actors are talking over each other which can cause viewers to easily miss some very funny lines - so pay attention! Unless you absolutely hate goofy comedies, I recommend this film.