Thanks to +Nicholas Neagle for writing this movie review for Lavender Inspiration. I'll admit, I only see super hero films with my son and since this one was rated R, I wouldn't be seeing it anytime soon. Here's what Nick had to say about Deadpool. 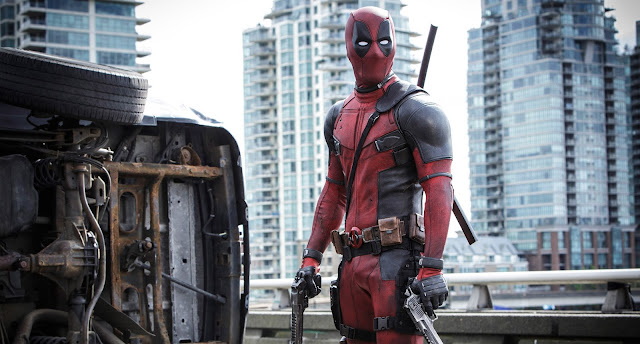 Ten years in the making, Deadpool had a lot of pressure to live up to the hype. With that said, it does not fail to disappoint its adult fans who have been waiting years to see their favorite “Merc with a Mouth” dash and slash on the big screen. Since the beginning, Ryan Reynolds has wanted to play this part, and we see why as soon as the movie begins. He is a perfect fit, a real life ball of sarcasm with a potty mouth. Of course, we would not want it any other way.
To begin, the movie certainly earns its R rating with ease. The violence and language are enough on their own to be paused on for younger fans, so parents be warned. There are many examples of strong language beyond that of the f-bomb, mostly very sexual and suggestive matter. It all goes along with the comic and the Deadpool character, but certainly something to remember before some viewers watch.
The film begins as an origin story which, if you are a comic fan, know all too well in the theaters. The story is a good one, an intense one, and an emotional ride you should prepare yourself for if you have gone through cancer yourself or with a loved one. This doesn’t last long though. It quickly cuts back to plenty of humor and lots of action. I can assure you of one thing, the action is great and well done.
There is no holding back from either side - there is a lot of sweat and blood. Once the story gets moving, the movie becomes much faster paced, and the characters give you lots to love, or hate, about them in a rush. Deadpool’s nemesis and his troops become the focus of moving the story along, even if cheesy at times.


The movie very quickly introduces two key figures in Deadpool’s life, his girlfriend Vanessa, amazingly portrayed by Morena Baccarin, and his close friend Weasel, hilariously played by the comedian T.J. Miller. The love story gives it a little more than most comics can, and that was a bonus for me, as I am sure for many other viewers. Reynolds continues to pull the movie’s audience in with his wise cracking, but he is not alone.

Two X-Men - Colossus, motion-captured performance by Stefan Kapicic, and Negasonic Teenage Warhead, played brilliantly by Brianna Hildebrand - try to keep the a balance between mutants and the humans from getting too violent, but instead end up fighting with Deadpool. They are fighting a very stereotypical villain, Francis, played by a relatively new actor, Ed Skrein.

Overall, the story might not be the best of Marvel’s movies, but it certainly is entertaining and full of fun. The final scenes are very climactic and important for all the characters. No spoiling, of course, but the end holds a lot of action and some surprises. The movie did not disappoint me. Sure it is not a complex story, nor does it comment on any serious social topics, but it is a lot of fun and a great escape.

~ This review was written by +Nicholas Neagle for www.lavenderinspiration.com.