The Girl in the Spider's Web (Book Review)

"...the mark of a man is his contradictions." ~ The Girl in the Spider's Web 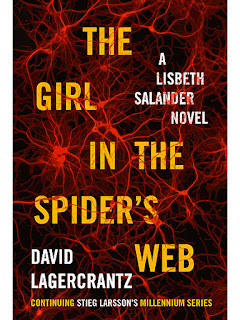 I enjoyed the first three novels in the Millennium series by Stieg Larsson so much that I featured them in my Nik's Piks favorites for thriller and crime series.

Therefore, I was excited when the publishers announced that the series would continue on despite the death of Larsson. In August of 2015, the fourth book in the saga, The Girl in the Spider's Web written by David Lagercrantz, was released and fans of Lisbeth Salander and Mikael Blomkvist were delighted that the story of these two unlikely allies would continue.

Countless other characters and plot lines return as well. Therefore I do not recommend reading this novel without having read the three prior books.

In fact, if I may be completely honest, I would not recommend you read this book under any circumstances. This novel was a complete waste of my time (it took me several months and three separate attempts to complete it), but I pushed on hoping that it would get better. It did not.

The premise is decent enough. Frans Balder is a scientist working on Artificial Intelligence. However, his work has put him in great danger and when he returns to Sweden to care for his eight-year-old son, August, who suffers from infantile autism, his work and his life become the target of a criminal organization.  August witnesses a terrible crime and Salander makes it her mission to protect the boy from harm. Meanwhile, Blomkvist believes he has found a story that will put his name back on the forefront of journalism.

"To be alive means not being completely consistent. It means venturing out in many directions all at the same time." ~ The Girl in the Spider's Web

Unfortunately, this author's WRITING was venturing out in too many directions all at the same time!  Despite a promising story line, the execution was awful. Lagercrantz's skill was not up to par with Larsson and both the tone of the story and the characters seemed different. These are not Larsson's Salander and Blomkvist. They were unrecognizable from the characters I loved in the previous novels and I did not feel the connection with them as I previously had.

The story was choppy and never caught my full attention. Many scenes are told over again from different perspectives of multiple characters and, while this started off as a promising style, eventually proved to be tedious and often confusing.

Fans of this series will be highly disappointed. Unfortunately, I can not recommend this novel to anyone.