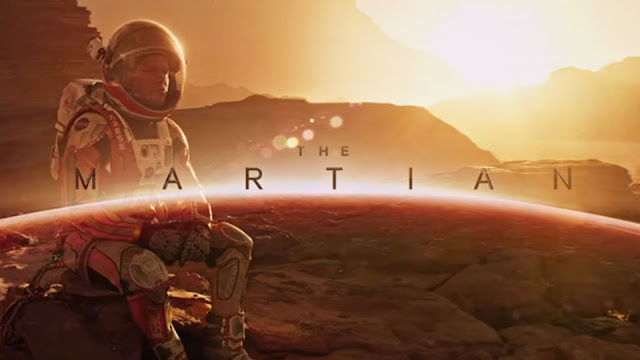 When The Martian was first released in theaters last October, I'll admit I didn't have a desire to run out and see it.  Based on the novel by Andy Weir, The Martian has received numerous industry nominations and awards which definitely piqued my curiosity and was the main reason I decided to sit down and watch it.

"This is space. It does not cooperate." ~ The Martian

Reminiscent of Apollo 13 and Castaway, The Martian is about a NASA botanist, Mark Watney (played by Matt Damon), who is left behind on Mars after he is presumed dead by the rest of the crew. His struggle to survive alone on a hostile planet is both inspiring and riveting.  When NASA discovers he is still alive, they are forced to deal with a PR nightmare.  Tough decisions are made and plans are devised to bring him supplies until a rescue mission is possible.

Damon was nominated for an Oscar for his portrayal of Watney, and took home the Golden Globe for Best Actor in a Musical or Comedy. However, The Martian is obviously NOT a musical and is a far cry from a comedy despite the often light mood of the film. Don't misunderstand me. It was certainly not the heavy dramatic film I was anticipating either.

Regardless of the film's identity crisis - is it a drama or a comedy? - it kept my attention from the opening scene and the entire cast delivered stellar performances. However, I didn't feel that any of the characters were fully developed so I did not experience a deep connection to any of them, not even Watney, and the plot was quite predictable. Despite all that, I would still recommend this film and not just to fans of science fiction. It is simply a feel good underdog story.