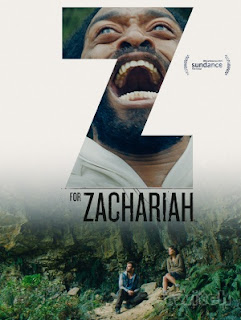 I decided to watch the 2015 film Z for Zachariah after seeing the trailer and, well, who am I kidding, because it co-stars Chris Pine. Based on the novel by Robert C. O'Brien, Z for Zachariah is an interesting story of a post-nuclear world with strong spiritual and religious components. It is a subtle film where as much is said with the characters' body language as by their words. For this reason, I will admit, not everyone will enjoy this film.

Believed to be alone on the earth after a radiation disaster, Ann (played by Margot Robbie) struggles to survive on her family's farm which she believes is blessed because it remains untouched while the rest of the world and its people are decimated. One day she stumbles upon another survivor, John (played by Chiwetel Ejiofor) and the two slowly develop a very caring relationship toward each other while working together to rebuild their lives.

However, their peaceful existence is threatened by the arrival of Caleb (Pine) and the situation quickly develops into an unusual and tumultuous love triangle. Trust is not given easily as the three characters learn about each other and are haunted by their pasts and the things they did to survive.

There has been quite a bit of discussion regarding the meaning of the title which, quite frankly, isn't explained. However, according to my research, it is explained in the novel and is worth addressing. It does not spoil the film in any way. In fact, it might add an element of interest.

Ann's father was the town's preacher. She grew up with a collection of children's books that were both biblical and alphabetical in nature. For example, A is for Adam.  It is to be inferred that if Adam was the first man on earth, than Zachariah is the last. Upon meeting John, Ann believes he is the last man alive. However, after more research into the Book of Zechariah, I also discovered that there is a much deeper biblical meaning. The Book of Zechariah is said to be itself apocalyptic in nature. Some would say that Zechariah's teachings themselves (that failure to listen to God will bring punishment to the people for their sins) are an important element of this film's title and hidden meaning.

The overall pace of the film is slow, yet the tone is mysterious throughout which will hook most viewers. The ending may be questionable to some and offers an insight into the minds of each character. I enjoyed the story and the performances, but feel the film could have had more tension and suspense.

Z for Zachariah is rated PG-13 for a scene of sexuality, partial nudity, and brief strong language.