I completely understand my son's frustration - I really do! He doesn't get math homework for weeks on end and then gets 30 problems in one night. (I really never understood why teachers did that kind of crap. I'd rather my son have 5 problems every night than 30 in one.)  AND, of course, it is a night we have soccer. No, not even for him - for his brother.

However, I really don't see why he has to take his anger out on me. Just today I was having lunch with my friend and I was complimenting this same son on his ability to completely take control of his own school assignments. No more homework battles, no whining - he just manages his time and workload beautifully. (Although, I'd like to think this success has something to do with the years of teaching him time management and study habits.)

But tonight, the 30 math problems (his absolute worst subject) was just too much and, coupled with the fact that he was going to have to sit through yet another one of his older brother's events, proved to be too much for this kid. 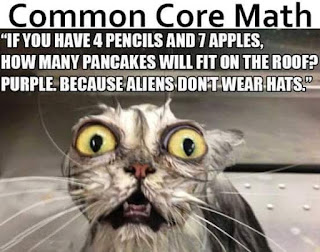 There was yelling......there was crying.....and, at one point, there was even a pencil thrown. Seriously? What are you - two? Now that I think about it, there may have been some cursing, but he is MY son, so........I'll take the fall for that form of expression.

I can relate. I never liked math, although I did fairly well in the classes I took because grades mattered to me. I don't think I got my first C on an assignment until I was in college and that was on an exam I took two days after having my tonsils out and was completely doped up on pain medication. Yet, for some reason, my sons think it is completely acceptable to come home with Cs.  News Flash: IT. REALLY. ISN'T.

I think what frustrates me most is that my sons have a built in teacher as a mom and a math wiz as a dad - something, quite frankly, that could come in handy if they would stop freaking out and learn to take advantage of that. As much as I dislike math, I am usually very good at explaining things - so even if my husband has to explain it to me, I am then, usually, better at teaching the skill. There's just one catch to this method.  MY SONS HAVE TO BE WILLING TO LISTEN, which, of course, nine times out of ten, they aren't. 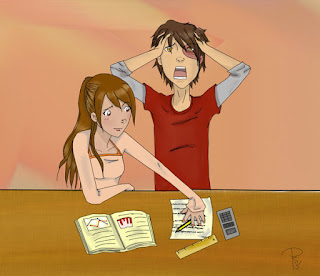 I guess I should be grateful that math is the only subject matter that evokes such an outburst from him. My older son basically has this attitude toward every subject and assignment. At one point or another both sons have told us we don't know what we're talking about. Sigh.

Is it summer vacation yet?

Battle on the Homework Front