As a continuation of my Nik's Piks book collection (favorite books by genre), I bring you my top three thriller / crime series - two of which have new releases that I can't wait to read!

Click here to read my selections of Memoirs and Women's Fiction. 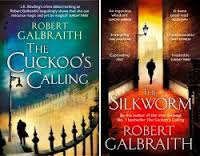 The Cormoran Strike series by Robert Galbraith (J.K. Rowling) is the newest on my list of series and already includes two best- selling novels, The Cuckoo's Calling and The Silkworm.  The third novel,  in this detective series, Career of Evil, was just released October 20, 2015 and I can't wait to read it!  This is a  sexy and intelligent crime series with characters that readers will instantly connect with. Rowling plans seven total books for this series and in development is a new BBC One drama series based on the novels.

Known as the Millennium series, this thriller / crime series by Stieg Larsson takes place in Sweden, primarily Stockholm. In fact, after visiting the city a few years ago, I came home and immediately started reading the series that refers to real landmarks and locations in this magnificent city.  The plots are very intense, sometimes brutal, with suspense that will have you on the edge of your seat. Unfortunately, up until August of this year, the series was cut short due to Larsson's death.  The newly released fourth book, The Girl in the Spider's Web - top on my To-Be-Read list - was written by David Lagercrantz.  The first novel, The Girl with the Dragon Tattoo was adapted to film by American filmmakers, but we are still waiting on the sequels. All three novels have already been adapted to film in Swedish versions.

The Robert Langdon series by Dan Brown is my absolute favorite series in this genre. I have read all four novels in the series, but, ironically, I started with book four, Inferno, and worked my way backwards (which wasn't a problem at all). Set in major cities throughout the world, these novels will have your mind spinning with history and intrigue. For me, the subject matter in each of these novels is what made them so fantastic. The Lost Symbol is quite possibly my favorite of series.  The series gained even more notoriety when Tom Hanks played Professor Langdon in two film adaptations of the novels, Angels and Demons and The Da Vinci Code.  Inferno is due to be released in theaters In October 2016 and remains to this day the only novel to ever give me nightmares because of its intensity.

Check out my Book Reviews too!