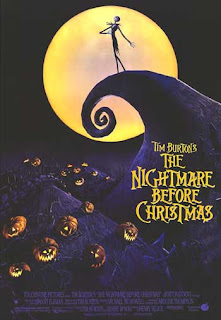 From the imagination of Tim Burton comes one of the most popular Halloween family films, The Nightmare Before Christmas.  I am a bit embarrassed to say that up until this week, I had never seen it.  It's not that I didn't want to.  The opportunity just never arose. My older son has never had an interest, and my younger son never watched it in its entirety - just bits and pieces here and there.  He told me yesterday that he didn't particularly care for it, but "maybe I was just too young at the time."

His statement made me laugh but also contradicted what I was going to say about the film.  Despite its creepy ghouls, goblins, and the sort, I think this film is actually best suited for younger viewers.  None of the spooky characters seemed all that scary to me, but, of course, each child is different so parents might want to watch the film first.

The film centers around Jack Skellington, the Pumpkin King, and the other ghoulish residents of Halloweentown.  As yet another Halloween comes to an end, Jack realizes that he is bored with the same old Halloween traditions. Tomorrow he and the mayor of the town will begin preparations for next year's Halloween.  Distraught with the realization that this is all there is to life, Jack walks all night through the forest and in the morning stumbles upon a secret passage to another place - Christmastown!

Mesmerized by the scene before him of Christmas trees, lights, joyous songs, and warm and happy feelings, Jack decides to bring this magic to Halloweentown.  After all, why can't good feelings and smiles replace monsters and scary moans?  Upon returning to Halloweentown, Jack can't wait to share the wonders he has discovered in Christmastown.  Unfortunately, the residents of Halloweentown have a difficult time comprehending it all.  Jack decides he will help them understand by bringing Christmas to them.  He will personally take over the Christmas holiday. But, to do that, he must first kidnap Santa Claus!

I don't want to spoil the rest for you, but here are some things parents need to know.  Although the film is filled with the creepiest of monsters, they are, at the same time, sort of adorable, in a Tim Burton kind of way. (Picture Jack's ghost-dog, Zero, with a red nose and skeleton reindeer to pull the coffin sled.)  Also, The Nightmare Before Christmas is in fact a musical!  Chris Sarandon is wonderful as Jack Skellington, but it is Danny Elfman, who does the singing for Jack's character, that steals the film with his magnificent vocals.

I did not intentionally pick two Tim Burton films for my month of Halloween family films. But I have really been wanting to see this film, and, although I didn't love it, it is simply perfect for a fun Halloween family movie.  The Nightmare Before Christmas is rated PG for for horrific images and some animated violence.  But I have to tell you, I've seen worse on Saturday morning cartoons.