The film adaptation of Stuart Little is based on the story by E.B. White and was always a favorite of my sons.  Released in 1999, the film combines live action and computer animation (it was nominated for Best Visual Effects) and stars Michael J. Fox as Stuart Little along with Geena Davis (Mrs. Little), Hugh Laurie (Mr. Little), and Nathan Lane as the Littles' mischievous cat, Snowbell.  The film spawned two sequels along with a brief television series. 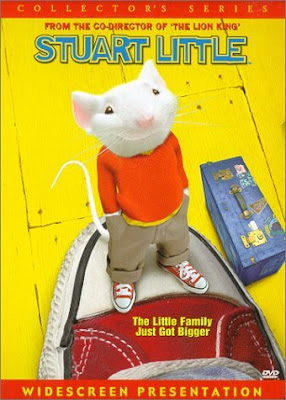 The Littles decide to add to their family of three by adopting a second child.  However, once at the orphanage, Mr. and Mrs. Little fall in love with Stuart - not a child, but an orphaned mouse.  They decide to make him part of their family. However, the Littles' older son has a hard time accepting Stuart as his new brother.  It quickly becomes apparent that the Littles didn't think this decision through carefully when their pet cat, Snowbell, nearly has Stuart for dinner.

The beginning of the film focuses on Stuart's adjustment to life with a human family and provides some obvious laughs, but quickly shifts its attention to the fact that Stuart feels an "empty space" in his heart and decides he'd like to try and find his biological parents. Snowbell, with the help of his street-wise feline friend, Monty (Steve Zahn), devises a plan to get Stuart out of the Little home for good, which will allow Snowbell to save face among his cat friends who tease him relentlessly for being the cat whose master is a mouse.

What ensues is the ultimate game of cat and mouse (quite literally) as Stuart must find his way back to the Littles and prove that family is who you choose it to be.

Stuart Little is rated PG for brief language (damn being the worst of it). There are some cute, even silly, scenes that will sure to entertain. Without trying to sound biased, the cats really stole the spotlight in this film. It is suitable for the entire family, particular those with younger viewers, and makes a fun, family movie-night when you've already exhausted the more recent films.